his update to the Rhino Lights set of components allows for the manipulation and creation of Rhino light objects from grasshopper. This revision internalizes the GUID of baked lights so their properties can be altered without the need to re-enter the GUID’s. the GUID’s are still output and can be copied, and inputting them into the components ID input will associate changes to the referenced light.

The components were originally developed to create shadow studies in Rhino driven by Ladybug, as an alternative to using Rhino’s sun system, which changes the color of the sun to reflect its intensity at a given time of the day. In the case of this study, it was important to keep the shading consistent, but match the sun angle. This required the movement of a directional light in Rhino controlled by a vector in Grasshopper. This lead to the development of the larger set, featured here, which covers all the typical light types in Rhino. These components are based off the fantastic work by Andrew Human’s, Human Tools, and the posts of Luis Fraguada. The distinction in this set of components is that they allow for both the creation of a light object, like with Human Tools, and the modification of lights via their GUID. This relationship allows the one-time creation of the lights based on grasshopper parameters, which outputs both the light objects and the GUID’s which can be copied and referenced to then update the light’s properties. Lights created within Rhino can also be modified directly through the GUID component. 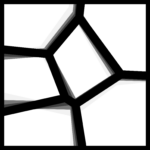